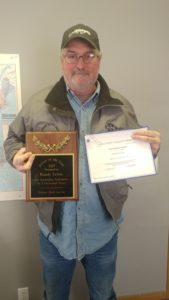 As being one of the Midwest’s leading dry bulk carriers, they were awarded the Compass Minerals 2010 and 2011 “Service Excellence Award” at the Service Excellence Awards Banquet held in Overland Park, KS. Selection as a service award winner is based on a two-step panel review process that evaluates award winners on consistent service excellence, along with innovation and logistics solutions.

“Dahlsten Truck Line, Inc. is honored to receive this prestigious award from Compass Minerals,” President George Akerson said. “This award says a lot about the caliber of our people, both in Nebraska and Hutchinson, KS. Our drivers and operations personnel have the highest standards for service and professionalism, and this award exemplifies those qualities.”

Dahlsten Truck Line, Inc. has been serving customers’ truckload needs since 1946, first throughout the Midwest and now throughout the continental states and Canada. Dahlsten maintains two separate operations divisions – dry bulk and package.