Dahlsten Truck Line, Inc. began operation in 1946 with one truck driven by Howard Dahlsten. By 1955, three more trucks had been added. A year later the first contract authority and five additional trucks were obtained with the purchase of K. H. Thiel Truckline. Over the years the company has grown exponentially and now has three terminals operating in the 48 contiguous states as well as Canada; transporting an excess of 27,000 truck loads per year. Dahlsten Truck Line began as, and remains, a family owned trucking firm with all corporate stock owned by the Dahlsten family. 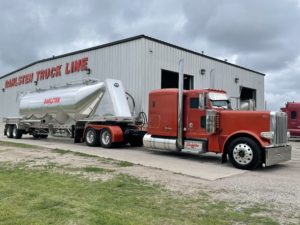 Dahlsten Truck Line now owns or has under lease approximately 75 power units and maintains two separate operations divisions- package and bulk- with separate operations personnel assigned to each division. Our equipment includes dry vans, reefers, and pneumatic trailers with power units that are maintained in the highest industry standards. Our tractors are satellite equipped, with dash cameras and electronic logs for driver safety.

It is our goal to achieve total customer satisfaction and with this array of equipment, we are able to provide personalized service.